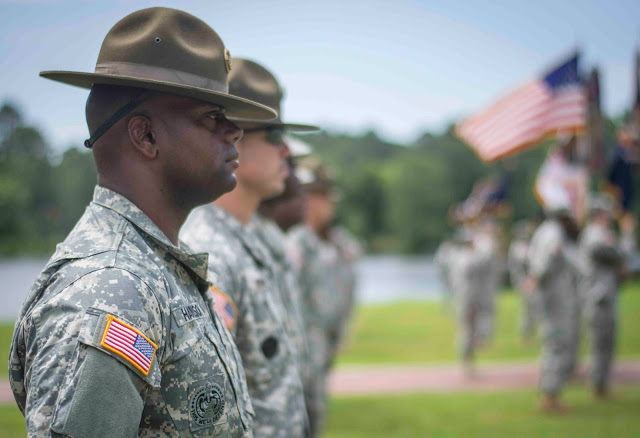 When packing for one of my first training experiences with the U.S. Army, back in the late 1980s, I knew that free time and footlocker space would be at a premium. I could live without luxuries like my Walkman cassette player for a few months. I also wanted to avoid avoid too much gruff from drill sergeants. So I stuffed a paperback copy of Shakespeare’s “Henry V” into my left cargo pocket, wrapped in a plastic sandwich bag, as my sole entertainment.

If nothing else, I thought, I’d work on my memorization skills. (“Oh, for a muse of fire-guard duty …”) Little did I realize that so much of my brain would already be filled, starting those summer months at Fort Knox, Ky., with the nursery rhymes of Uncle Sam. Training was full of poetry. Sometimes, it was profane. “This is my rifle, this is my gun!” Sometimes, it was pedagogical. “I will turn the tourniquet / to stop the flow / of the bright red blood.” There were even times that it was nearly pathological. “What is the spirit of the bayonet?! / Kill! Kill! Kill!”

These basic phrases connected us new recruits to the yellow footprints of those who had stood here before, marched in our boots, squared the same corners, weathered the same abuses. Every time we moved, we were serenaded by sergeants. Counting cadence, calling cadence, bemoaning that Jody was back home, dating our women, drinking our beer. We learned our lines, our ranks, our patches, our places as much by tribal story-telling than by reading the effing field manual. Even our soldier humor was hand-me-down wisdom, tossed off like singsong hand grenades. Phrases like, “Don’t call me ‘sir’ / I work for a living!” and “You were better off when you left! / You’re right!”

Nobody’s quite sure why April got the nod as National Poetry Month. I like to think that it’s because of that line from T.S. Eliot’s “The Wasteland”: “April is the cruelest month.” Because that sounds like the Army. Besides, in springtime, the thoughts of every warrior-poet lightly turns to baseball; showers that bring flowers (“If it ain’t raining, it ain’t training!”); and the start of fighting season in Afghanistan.

Poetry, I recognize, isn’t every soldier’s three cups of tea. Ever since I entertained my platoon mates with Prince Harry’s inspiring St. Crispin’s Day speech, however, I’ve enjoyed sneaking poetry into the conversation. Perhaps more soldiers would appreciate poetry, were they to realize the inherent poetics of military life:

Every time you go to war, you are engaged in a battle for narrative. Every deployment—individually as a soldier, or collectively as an Army or nation—is a story. Every story has a beginning, middle, and end. Every story is subject to vision, and revision. History isn’t always written by the victors, but it is re-written by poets. Treat them well. Otherwise, they will cut you.

Every time you eat soup with a knife, you are wielding a metaphor. Every “boots on the ground,” every “line in the sand,” every Hollywood-style named operation (“Desert Shield”! “Desert Storm”! “Enduring Freedom”!) is a metaphor that shapes our understanding of a war and its objectives. If you don’t understand the dangerous end of a metaphor, you shouldn’t be issued one.

(There’s also a corollary, and a warning: As missions change, so do metaphors. In other words, when a politician trots out a new metaphor for war, better check your six.)

Every poem is a fragment of intelligence, a piece in the puzzle. A poem can slow down time, describe a moment in lush and flushed detail. It can transport the reader to a different time, a different battlefield. Most importantly, a poem can describe the experience of military life and death through someone else’s eyes—a spouse, a villager, a soldier, a journalist. Poetry, in short, is a training opportunity for empathy.

Soldiers like to say that the enemy gets a vote, so it’s worth noting that the enemy writes poetry, too. Like reading doctrine and monitoring propaganda, reading an enemy’s verse reveals motivations and values. Sun Tzu writes:

Every time you quote a master, from Sun Tzu to Schwarzkopf, you are delivering aphorism. I liken the aphorism—a quotable-quote or maxim—to be akin to concise forms of poetry, such as haiku. In fact, in my expansive view, I think aphorisms should count as poetry. In the world of word craft, it can take as much effort to hone an effective aphorism than it does to write a 1,000-word essay. Aphorisms are laser-guided missiles, rather than carpet bombs. We should all spend our words more wisely.

Reading a few lines connects us to the thin red line of soldiers past, present, and future. Poetry puts us in the boots of those who have served before, hooks our chutes to a larger history and experience of war. The likes of Shakespeare’s “band of brothers” speech, John McRae’s “In Flanders Fields,” and Rudyard Kipling‘s poem “Tommy” continue to speak to the experiences and sentiments of modern soldiers.

I am happy to report that more-contemporary war poets have continued the march.

Here’s a quick list to probe the front lines of modern war poetry: From World War II, seek out Henry Reed’s “The Naming of Parts.” For a jolt of Vietnam Era parody, read Alan Farrell’s “The Blaming of Parts.” From the Iraq War, Brian Turner’s “Here, Bullet.” In this tight shot group, modern soldiers will no doubt recognize themselves, their tools, and their times. Here is industrial-grade boredom, an assembly line of war, punctuated with humor and grit, gunpowder and lead.

Finally, you can buy an pocket anthology of poetry, such as the Everyman’s Library Pocket Poets edition of “War Poems” from Knopf, or Ebury’s “Heroes: 100 Poems from the New Generation of War Poets.” Stuff it in your left cargo pocket. Read a page a day as a secular devotional, a meditation on war. Or, pick a favorite poem, print it out, and post it on the wall of your fighting position or office cube. Read the same poem, over and over again, during the course of a few weeks. See how it changes. See how it changes in you.

Remember: It’s National Poetry Month. And every time you read a war poem, an angel gets its Airborne wings.

*****
Randy Brown embedded with his former Iowa Army National Guard unit as a civilian journalist in Afghanistan, May-June 2011. He authored the poetry collection Welcome to FOB Haiku: War Poems from Inside the Wire (Middle West Press, 2015). He is the current poetry editor of Military Experience and the Arts’ “As You Were” literary journal. As “Charlie Sherpa,” he blogs about military culture at: www.redbullrising.com.